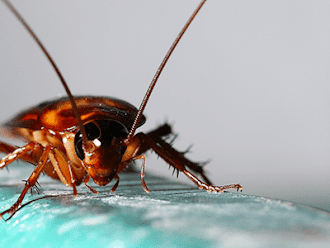 It is thought widely that these roaches immigrated with sailors when they brought over plants, spices, animals and other insects from different parts of the world.

How do you tell the two apart?

The largest species of cockroach would be the American cockroach, which can measure up to 3 inches (not counting the antennae’s length). They also have the longest lifespan for a cockroach, which in cockroach terms, is considerably long at up to 2 years.

The American cockroach is a reddish brown color. They are a flattened, oval shape. They also have a very distinct pattern on their backs, just below their heads, that looks like the number 8. Immature roaches don’t have wings, but adults do, and while they are capable of flight, they’re not regular fliers and prefer to scamper across the ground with their 6 legs at very fast speeds (up to 3 miles per hour, which makes them one of the fastest insects out there).

Like most of its species, they can feed off a lot of things, from trash to other dead cockroaches.

The German cockroach also has a distinct pattern on its back – but where the American cockroach has a figure 8 pattern, for the German cockroach it’s two dark stripes on their back that are parallel. They’re tan or brown in color, and are known as the most common cockroach found in residential homes in the US and in the world. These roaches are smaller than their American counterparts at about half an inch, and they only live for about 200 hundred days.

While they have wings, similar to the American cockroach, they’re also not regular fliers and prefer to move on the ground instead.

They have been observed to eat common household toiletries like toothpaste, soap, even things like glue. Where the American cockroach will eat another dead cockroach, the German cockroach has been known to kill a live one to eat in more extreme cases of hunger.

Both species can survive several weeks without any food, but will die without water or moisture for more than two weeks.

It is often said that when you see one cockroach, there’s likely a whole colony of them, or as it is more formally known, interestingly enough, a cockroach intrusion.

Another sign you have them in your home is if you see their egg capsules, which are dark brown or a very dark red, which they leave behind glued to walls or other surfaces near sources of food, and many people report a musty smell when there’s a heavy cockroach infestation in an area.